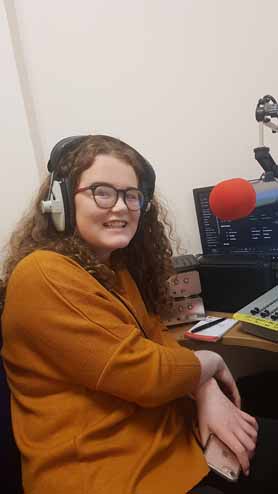 Sally Collins from Dunmanway is following in her father Brian’s footsteps, having recently debuted as a DJ on West Cork FM.  Sally who is just 15 and currently in Junior Cert year has been using her time off school due to Covid 19 to keep the spirits up of young and old by hosting her children’s disco on air and also joint hosting with her Dad on other shows.  With her first solo show in November 2019, she even grabbed the attention of Ian Dempsey, Irish television personality and presenter of the long running breakfast show on Today FM, who tweeted “You’ve got to have a dream, I had a dream when I was 14.  Best of luck Sally”  At first she admits she didn’t like the sound of her voice but soon found her comfort zone and realised it was a lot of fun.  Sally says what convinced her to host her own show was the support from the listeners texting in requests to the station. “It was only then I realised how much of a big deal it was to other people and what an amazing opportunity it was.”