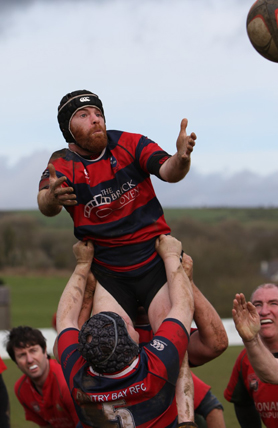 The West Cork Jesters, a mixed ability rugby team based in Bantry, have enjoyed considerable success since they were established in the summer of 2018.

The team has enjoyed a spectacular journey since then and their progress has been staggering. They are one of only five Mixed Ability rugby teams in Ireland, so the team is confined to blitzes and friendly encounters against the other teams and local teams. They had planned to compete in the Rugby World Cup which was due to be held by the Sunday’s Well RFC this June, but this much anticipated event has been postponed due to the outbreak of Covid-19.

The members of the West Cork Jesters team are still working away at home on their individual programmes as they strive to ensure they will hit the ground running when sporting action resumes.

Club coach Nobby Dunne is thrilled with the success of the West Cork Jesters since they were established. “We started off playing tag rugby and generally just training hard initially which was very enjoyable. We then participated in a Wooden Spoon festival in Ballyclare, Co Antrim last summer where we won all our games very convincingly. This left our players hungry for more action and we found Mixed Ability rugby which is full contact. Anyone of any ability can play. There are two rules to Mixed Ability rugby. The scrums are not contested and rolling subs are used. This met all our requirements perfectly. We have a nice mixture of players in our squad. We also have a number of very talented ladies players in our squad. We are hopeful of fielding an all ladies team in the future which would be another string to our bow. The concept has proved very successful. We cover the geographical remit of four clubs in West Cork. They are Clonakilty, Skibbereen, Dunmanway and Bantry. We have the full support from those club which is greatly appreciated.”

Nobby is loving his time working with and coaching the West Cork Jesters team. “I wouldn’t have much of a rugby background. I used to watch and follow my sons when they played underage rugby. When Eugene came into Bantry CoAction, I knew about the skills and the rules required for rugby. I had worked with the lads doing other things so I decided to help them along with this new adventure. Establishing the team has proved so beneficial for the players. It is great for them in terms of exercise, team-work and improving their communication. Improving our communication technique is vitally important and we use a lot of sign language techniques when both training and playing. It is very useful in games when other teams can’t follow our instructions and tactics!! I have seen so much improvement in all the players since they started playing. They are great to work with. They are so dedicated. We generally train three times a week. We do gym work on one day and skills on the other two days. This would have increased to four or five times a week with a game every weekend leading up to the World Cup.”

The support structure put in place within the West Cork Jesters squad has played a huge part in ensuring the team has been so successful since they were formed, revealed Nobby. “We had so much great help from so many people. This has played a big part in our success. The players guardians and their siblings have been so good to work with. The various local rugby clubs have also been very helpful. Our players are coming from all over West Cork. For example within the local Bantry hinterland, they are coming from as far away as Dursey Island, all the way into Bantry town. We have a good nucleus of players, but we are always looking out for more players.”

The West Cork Jesters team were very much looking forward to competing in the International Mixed Ability Rugby Tournament which has been re-scheduled for next summer 2021 due to the outbreak of Covid-19. Nobby is hoping the extra year will ensure they keep training hard and keep developing so they can peak for the new date. “We were preparing well for the tournament this summer. However I think we will be in much better shape for the new date. The players are determined to go full tilt in training for the next 12 months. They have improved immensely in such a short space of time. We have great potential within the squad. When the news broke that the tournament was postponed, the sense of disappointment was palpable in the squad. They are so looking forward to competing against international clubs and teams in front of big crowds. It will be a great event and something very much to look forward to. They will be going there, not to make up the numbers, but to bring success home to West Cork.”